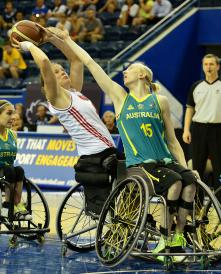 In a rematch of the quarter final of last year’s World Championships, the Australian Gliders took on the current World Champions, Canada in the first round of the 2015 Osaka Friendship Games.

With both teams missing major players, the Gliders set about avenging their quarter-final defeat against the Canadians at last year’s World Championships.

The Gliders entered the tournament without five players from their World Cup campaign, with the likes of World Championship starters Cobi Crispin, Clare Nott and Sarah Stewart omitted from this team to allow the introduction of four Gliders rookies – Georgia Munro-Cook, Hannah Dodd, Melanie Adams and Jess Cronje to be blooded in international competition.

The Canadians left out notable stars Janet McLachlan and Cindy Quelett, but retained 8 players from their World Championship team in the clash.

After a frantic first quarter, in which both teams struggled to find a rhythm, the Gliders managed to settle themselves first, taking a 16-10 lead into the first break before expanding out to a 22-14 lead at the main break.

Kylie Gaucii would apply the pressure for the Gliders as the game entered the third period as the team began to break down the trademark Canadian press with ease, helping the Gliders double their halftime lead to 16-points; a margin they would retain by the final scoreline.

“We got all players on court and 3 of our 4 rookies contributed on the scoreboard, most notably Georgia Munro-Cook hitting 3 of 7 to score 6 in her first game for the Gliders,” explained Head Coach Tom Kyle.

“The difference today was our speed, we simply out pushed them. Kylie Gauci was outstanding for us today, ablely assisted by Shelley Chaplin and Amber Merritt who dominated the glass.”

Gauci lead all scorers with 18, while Chaplin and Merritt contributed strongly with 10 a piece.

The Gliders second round challenge comes in the form of Great Britain, who defeated the Gliders in the 5th-6th playoff game at the World Championships.