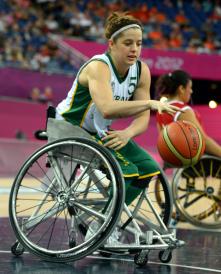 In a rematch of the 5th-6th classification game at the 2014 World Championships, the Gliders remained committed to blooding rising stars, whilst Great Britain would find themselves short of superstar Helen Freeman.

With both teams struggling to settle into an early rhythm, missing easy opportunities at the rim, it was the Gliders who would eventually ease their way to a healthy 17-6 lead at the first break.

Great Britain would open the quarter on a 6-0 run to narrow the margin, but a Gliders timeout presented the team an opportunity to regroup, steadying momentum and enforcing full court pressure to carry a 25-18 lead into the major break.

The third period began much the same as the third, with Britain the first to strike with another run, bringing the Gliders lead down to 4 points. The Gliders again rose to the challenge, doing most of their damage in the paint and ballooning the lead out to 10-points in quick time. Great Britain weathered the pressure at the end of the period where they would trail the Gliders by only 3 points at the last break.

But Great Britain would edge no closer as the Gliders applied the burners to race away to a 59-49 victory and rise to a 2-0 record at the tournament.

“I’m pleased to come away with the win but more importantly I’m ecstatic with the poise and control the girls showed to close the game out,” explained Head Coach Tom Kyle.

“In the past we may have lost our way but the new resolve of this group has impressed me. The future is looking bright as we show a relentless attitude to the challenge!”

The sentiments were echoed by Assistant Coach Gould, who remarked “I’m very pleased how we dug deep and ground out the win!”

Amber Merritt continued her outstanding form, finishing with an emphatic 24 points and 13 rebounds, receiving offensive support by Kylie Gauci who chipped in 21 points.

Australia’s next challenge will come in the form of Japan, the host nation, with a place in the gold medal game on the line.