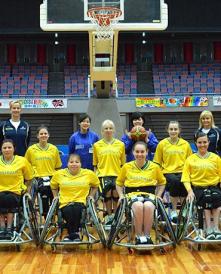 The Australian Giders have claimed the bronze medal at the Osaka Friendship Games after defeating Canada 75-73 in a thriller.

After falling to hosts Japan in the semi, the Gliders regathered in time to find a place on the podium led by Amber Merritt’s 35 points (62% FG) and 9 rebounds.

With both the Gliders and Canada eager to impose themselves early, the game began at a frantic pace. The Gliders would settle first into the first rhythm of the game, carrying a 17-12 lead into the first break.

With Canada insistent on continuing a full court press, the Gliders turned to veteran stars Kylie Gauci and Amber Merritt, whose speed proved hazardous for the Canandian defensive stand. The strong play of Katie Harnock kept Canada in the contest as the halftime break approached.

Canada, the World Champions, capitalised on the Gliders slow start to the second half, after the green and gold turned the ball over three times in quick succession, allowing Canada to finally take the lead.

With the game on the line, Tom Kyle inspired his troops, and the Gliders responded to jump out to a 6-point lead as the game drew to a close. Despite the late heroics of Katie Harnock, the Gliders were able to weather the storm, hitting 5 of 6 free throws in the closing stages of the game to claim a 75-73 win and the bronze medal.

The Gliders were led by Amber Merritt’s 35 points (15-24 FG) and 9 rebounds, whilst Kylie Gauci provided her usual steadiness with a critical double-double performance, scoring 12 points (6-11 FG) and dishing out 17 assists.

The win brings the Osaka Friendship Games to an end as the Gliders begin the next stage of their Paralympic preparations.