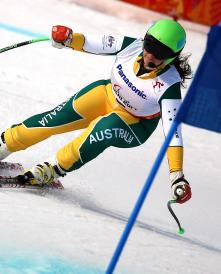 Four of Australia’s best alpine skiers have been selected by the Australian Paralympic Committee (APC) to race for gold at the IPC Alpine Skiing World Championships in Panorama, Canada next week.

The strong contingent will be made up of NSW vision impaired skier Melissa Perinne guided by Andrew Bor, sit skiers Victoria Pendergast and Mark Soyer, and Mitchell Gourley who will be fighting for a medal after his unsuccessful World Championships debut in 2013.

After a triumphant World Cup circuit which saw the Australian team win a total of 11 medals, APC Alpine Coach Christian Geiger believes each of the four athletes have what it takes to medal.

“We’ve had some really good training throughout the season, and we hope to walk away with a few medals, hopefully one or two being Gold,” he said.

Perrine, who made history four years ago when she became the first Australian female to medal in her sport at a World Championships is one of the main medal contenders, as Gourley in the men’s standing category.

In addition to these two Paralympians, Geiger believes that Australia’s Paralympic first female sit skier Pendergast will surpass all expectations.

“Considering the training times of the last few days, I think Victoria may surprise and pinch a medal in the women’s sit-skiing if she can produce the same speed and confidence,” he said.

To ensure the best chance of success, Geiger has changed their training tactics considerably in the last year following the Sochi 2014 Games.

“The approach of training in smaller resorts such as Powderhorn in Colorado allowed us to be away from other teams and focus on ourselves, which also brought the team closer together away from distractions,” Geiger said.

“If the athletes focus on themselves and show what they can do, I believe we’ll have a successful World Championships campaign.”

The 2015 IPC Alpine Skiing World Championships will be held from 1-10 March in Panorama, Canada and will see 130 athletes from 30 countries compete in what will be the biggest gathering of skiers since the Sochi 2014 Paralympic Games.