Aussies ready for action at the IPC Para-snowboard World Championships 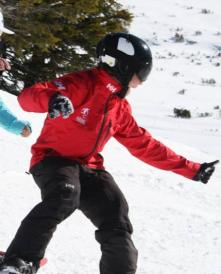 Australia’s Para-snowboarders Joany Badenhorst and Ben Tudhope will be up against the best at the 2015 IPC Para-snowboard World Championships which commence tonight (24 February) in La Molina, Spain.

The 2015 World Championships will be the biggest gathering of riders since the sport made its debut at the Sochi 2014 Paralympic Games, with 42 riders from 18 countries competing in snowboard cross and the new discipline of banked slalom in upper-limb and lower-limb classifications.

20-year-old Badenhorst will aim to reach new heights in her sport, in continuation with her stream of successes throughout the World Cup season.

Having won three silver and one bronze medal from this year’s circuit, she will look to close the gap between reigning Paralympic champion Bibian Mentell-Spee (NED) who has won all of her races in 2014/15.

Australia’s youngest Paralympian Ben Tudhope has gone from strength to strength throughout the season, placing 6th in his two best races.

As the youngest competitor at the World Championships, he will face Paralympic champion Evan Strong, silver medallist Mike Shea and bronze medallist Keith Gabel, who he most recently competed against at the 2015 Winter X Games.

The IPC Para-snowboard World Championships will be broadcast live at paralympic.org/la-molina-2015