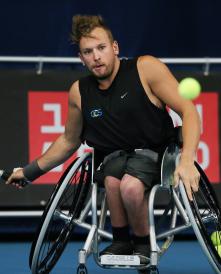 In the quad wheelchair singles final, Australian Dylan Alcott gave his large fan club much to cheer about as he claimed his first Grand Slam title in his home city with a 62 63 win against David Wagner.

Alcott claimed an immediate break and eased to the first set against the defending champion. Rain halted play briefly at the start of the second set before Alcott came back out and proved too strong for Wagner.

The 24-year-old said: ‘I’ve got a lot of friends and they all came out to support. To have 500 of my friends there and to win was incredible. I was a bit nervous when I was walking out and then I saw them, it actually calmed me which was good.

“To do that at the Australian Open on my home court, that’s the definition of a dream come true.

Moments after, Alcott received a tweet of congratulations from Aussie teenager Nick Kyrgios. Alcott said: “We trained together [in the gym] every day when he was here in Melbourne. He’s always been a big supporter of me and wheelchair tennis.

“We had a hit together last year. Good on him for involving us and treating us like equals in the gym. He’s a top bloke.”