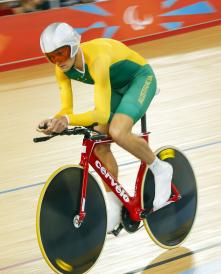 Cycling Australia is pleased to announce the addition of two tandem pairings to the Australian Para-cycling Track Team for the UCI Para-cycling World Track Championships to be held in Apeldoorn, Netherlands, from 26 – 29 March 2015.

“As per the selectors recommendations following the 2015 Subaru Track National Championships and the performances of Breeana Hargrave and Nicholas Yallouris, the team welcomes the pairings of Brandie O’Connor and Hargrave, who are currently ranked number two in the world, and new pairing Paul Kennedy and Yallouris to the team,” said Para-cycling Performance Director and Head Coach Peter Day.

Since pairing with Kennedy to claim time trial bronze at the 2014 World Championships, pilot Thomas Clarke (ACT) has switched his focus to the single sprint bike, making way for young-gun Yallouris to step up into the team.

“I think we’re both really excited to go to the worlds, it wasn’t something I expected. I had written off this year thinking I would have to wait until someone else came along but NSWIS and ACTAS organised for the two of us to ride and try out for worlds.

“I’m really excited, I almost can’t quite believe it came through.”

For Yallouris, it has been a steep learning curve to be ready to take on the world next month.

“It was two weeks ago and I had just finished the nationals and I was invited to have a go on the tandem to see if I had the goods,” said Yallouris who claimed silver in the New South Wales’ men’s team pursuit.

“I wouldn’t say it wasn’t daunting at the start, [but] Paul and I gel really well together on the bike and we’ve been going onwards and upwards each day.”

Team Australia finished as the most successful country at the 2014 Championships held in Mexico with a haul of 17 medals including five rainbow jerseys.

Read about the remaining members of Team Australia

Both Gallagher and Powell enter the Championship as the current world, Paralympic and national champions as well as world record holders in the individual pursuit, while Formston and Curran also boast the world’s fastest time in the pursuit.

Dual 2014 World Championship bronze medallist Alistair Donohue (VIC) will return to the track after claiming bronze in the under 23 men’s road race at the Mars Cycling Australia Road National Championships.

The team also welcomes back 2012 world champion and Paralympic Games silver medallist Bryce Lindores (QLD) who returns after a year away from the sport with a new partner in Mark Jamieson (TAS).

The team will take part in a training camp in Adelaide from March 8 and will depart for the Netherlands on March 17.