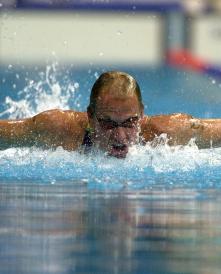 In 1993, while recovering in hospital after losing his leg in a car accident, Rolfe heard a news bulletin announcing Sydney was to host the 2000 Paralympic Games and resolved to be part of the Australian Paralympic Team.

“From day one I was always trying for the Games, and after seven years’ hard work, I made it,” he told the Western Advocate newspaper in 2000.

As a member of the Australian swim team, Rolfe won a relay bronze medal and as one of the older athletes on the team, he also played an important role helping his teammates.

Priya Cooper, 2000 gold medallist, recalled: “David Rolfe – or Rolfie as he was known to his Paralympic mates – really united our swim team in 2000 and was always there to mentor a younger swimmer.”

After Sydney, Rolfe embraced his former passion for canoeing and kayaking. As the sport grew and became a Paralympic sport for the Rio Games, he was one of its greatest advocates, even appearing in an International Canoe Federation video to promote the sport.

Brendan Flynn was CEO of the Australian Paralympic Committee during the 2000 Games. He is now Director of the Sports Super Centre on the Gold Coast, where Rolfe had been an employee for several years, and regularly met Rolfe on his early morning walks.

“Rolfie was a huge believer in living life to its fullest. He enjoyed a chat, and loved living on the Gold Coast, where he walked his beloved dog or rode his bike with his dog running next to him, then continued his passion of kayaking for hours at a time,” Flynn said.

“Rolfie was a very popular guy, who will be sadly missed by all who knew him, and remember him as a jovial, caring and passionate person.”

Members of the Paralympic community have set up a crowd-sourcing appeal to help David’s family to raise funds and have asked for support.

If you would like to assist David’s family, here is where you can donate: gofundme.com