#ReinstateSailing into the Tokyo 2020 Paralympic Games 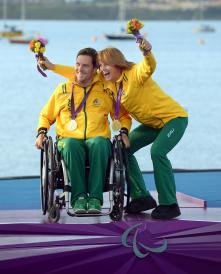 The recent decision of the International Paralympic Committee (IPC) not to include sailing on the Tokyo 2020 Paralympic Games sports programme shocked the international sailing community.

The news was an enormous disappointment for the sport of sailing worldwide, in our country and for our Australian Sailing Team and Squad athletes who are working hard, not only towards Rio 2016, but also towards Tokyo 2020.

Australian Sailing will now work together with ISAF and the 139 Member National Authorities (MNAs) to fight for sailing to be reinstated at the Paralympic Games and together we believe we can make this work.

Let’s feedback information to make IPC want sailing back in the Games. Let’s spread the news how important Paralympic sailing is for our sport as well as for an integrated sports world as a whole.

The decision is a loss to Paralympic sport as a whole as sailing provides unique opportunities for athletes with a disability to get involved with and participate in high performance sport and to compete on a world-class and paralympic level.
Paralympic sailing caters for athletes with a wide range of physical impairments including those with high-level disabilities such as quadriplegia, allowing sailors to steer and control boats using just a finger, toe or breath.

Or in the words of our dual Paralympian and 2012 London Gold Medallist Daniel Fitzgibbon: “Sailing is the only Paralympic sport that allows quadriplegics, such as myself, to compete against much more able athletes on an even and fair platform. And to take this opportunity away from future athletes in my situation, or worse, is a very disappointing decision.”

The Australian Sailing Team will be supporting the campaign with our athletes, we will be sharing our stories about our way into sailing, our love for sailing across multiple classes and the opportunities it brings for everyone with or without a disability.

Or (Twitter): NAME please RT to help #REINSTATESAILING at the 2020 Paralympic Games chn.ge/1zbZgqy

Thank you for your support to #ReinstateSailing!

See full statement of Yachting Australia with the support of the Australian Paralympic Committee about the decision here: yachting.org.au/international-paralympic-committee-removes-sailing

The Australian Sailing Team is the national representative team for Olympic and Paralympic class sailing and has currently six Paralympic athletes across the three boat classes SKUD 18, Sonar and 2.4mR on its team: australiansailing.org/teams/paralympic

Already in 2014 Australia qualified all three boat classes for the 2016 Rio de Janeiro Paralympic Games and at the 2014 IFDS Sailing World Championships Australia was the most successful team topping the Nations Cup scoring.

The same events were on show at Athens 2004 before the SKUD18 was introduced for the Beijing 2008 Paralympics Games as the equipment for the two-person dinghy outlining the evolution of sailing at the Games.

Athletes compete in three events, which are non-gender specific: The single-person and three-person keelboats are open to most impairment groups.  The two-person keelboat event is specifically designed for athletes with a severe impairment.
australiansailing.org/about-us/paralympic