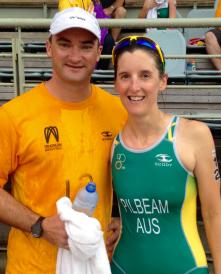 Australia’s Para-triathletes braved and then conquered atrocious conditions at the Oceania Paratriathlon Championships on Sunday.

Contested at the Nepean Regatta Centre in Penrith, competitors weathered the storm of pelting rain that confronted them on their 750m swim, 20km bike and 5km run – many of them with guides, hand cycles and prosthetic limbs that helped carry them round the course.

Some, like  ITU World Champions Bill Chaffey and Sally Pilbeam, have their sights set on the sport’s debut in Rio in 2016, others on this year’s World Championships in Chicago and others, many first timers, for the satisfaction of the challenge of triathlon.

Triathlon Australia’s National Manager Para-triathlon, Kathryn Periac was thrilled with the results and what she saw through her foggy eyes

“They all showed why they are such determined athletes, getting on with the job in conditions that were challenging indeed,” Periac said.

“No complaints, they just showed how good they are – displaying at times remarkable skills, particularly on their bikes – they are triathletes and that’s what they do.

“As far as our elite Para-triathletes were concerned I was most impressed with the level of triathlon performance shown in very challenging conditions and for the next group just how far they have come.

“Of the entire field we had 50 percent who were competing in either their first or second triathlons so we are delighted with the level they are at.”

Chaffey, the four-time ITU world champion from the Gold Coast was returning to competition after suffering two broken bones in his pelvis in a training fall last September and WA’s Pilbeam returned to Sydney after winning her maiden world crown in Edmonton last year.

Both won their respective classes, Chaffey in his PT1 class for wheelchair athletes and Pilbeam in her PT3 class for amputees.

They were joined by fellow High Performance squad members Brant Garvey (PT2) Justin Godfrey (PT3) and Paralympian sprinter Jack Swift (PT4) who all showed their class amongst the best in the world.

The surprise packet of the day came from young wheelchair athlete and outstanding rowing prospect Emily Tapp from Warwick in Queensland, who won the PT1 category on debut.

She clocked a time of 1 hour 27 mins 36.2 secs – which would have placed Emily in medal contention at last year’s world championships in Edmonton.

Chaffey, who has not raced since last June, said he was just happy to get back out and race and considering the conditions was happy with his time.

“When I looked up the long range weather forecast they said zero chance of rain…just goes to show they don’t always get it right!” said the philosophical Chaffey.

“It was certainly challenging, that’s for sure, but my plan was always to get out of the swim as quick as I could and smash it on the bike (hand cycle) and then maintain the pace on the run.

“My swim was solid but will have to improve on the international stage. The bike was strong and on the run it was difficult to get a grip, with the gloves slipping but all-in-all I was happy to get back and race after so much time away and to see all the training pay off.”

Pilbeam was again a standout, winning her category in 1:21.14.5 to again show why she is the reigning world champion in her class.