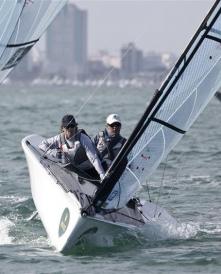 Following a successful 2014, Australia’s Paralympic sailors will be going for gold once again when the first ISAF Sailing World Cup of 2015 begins on Monday, 26 January in Miami.

“We have a strong fleet to compete against which is exciting. We’ve finished off 2014 successfully by winning in Melbourne and the plan is to kick off 2015 successfully as well,” Fitzgibbon said.

The duo will be up against their long-term rivals and last year’s Miami winners Alexandra Rickham and Nikki Birrell from Great Britain.

Having won in Miami in 2012, Fitzgibbon says that he and Tesch are looking forward to the challenge and there couldn’t be a better place to commence competition for the year.

“Miami is one of my favourite sailing venues overseas,” he said.

“It’s always nice weather there and warm with beautiful waters and manatees in the water. It’s a great venue to sail and we are really looking forward to the regatta.”

In the 2.4mR Tasmanian Matt Bugg will aim for a top spot after winning in Melbourne and finishing fourth at the North American Championships this week.

Competitors in the Paralympic events will have five days of fleet racing from Monday, 26 January to Friday, 30 January.

The racing will be available to watch live in 2D and 3D via the live tracking link:
sailing.org/worldcup/multimedia/tracking