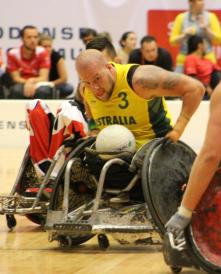 The tournament will take place from 12 to 16 October 2015 at the Copper Box, Queen Elizabeth Olympic Park, London, recently the venue for the Gold medal winning Great Britain Invictus Games Wheelchair Rugby team.  Competing nations have been divided into two groups and will battle it out for top position in each group before the play offs on Thursday and a thrilling battle for medals on the Friday.

David Pond, Chief Executive Great Britain Wheelchair Rugby comments, “Our aim is to provide teams with an opportunity to play the best in the world a year out from Rio as well as provide a world class event for the public and the many Rugby World Cup visitors to England.  Alongside the event we will be teaming up with London partners to host a community festival on Sunday 11 October which we hope will attract anyone interested in having fun in a chair.”

Tickets can be purchased at wwrc15.com