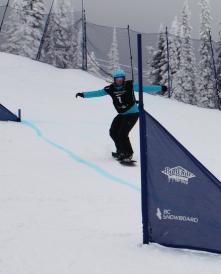 Competing in the banked slalom in the women’s lower limb classification, Badenhorst defiantly overcame problems with her prosthetic leg to secure her second World Cup silver medal in less than a week.

The performance of the 20-year-old leg amputee from NSW was even more impressive, given the change of technique she was forced to undertake mid-race due to a malfunction within her prosthetic left leg.

In banked slalom, competitors tackle the course over three runs with the two best runs counting towards the overall time.

“Joany’s prosthesis didn’t create enough suction and every time she went below an 80- degree knee angle, her [amputated leg] stump would rotate in the socket,” Prem said,

“After her first run she somehow managed to change her body position in the crucial turns and she pulled it off. It’s another podium finish and a silver medal.”

It capped a memorable week for Badenhorst, who claimed her first ever IPC World Cup silver medal in the women’s head-to-head event earlier this week across the border in Aspen, Colorado.

In other results overnight in Big White, Sydney teenager Ben Tudhope (2:31.89) finished sixth in the men’s banked slalom which was won by New Zealand’s Carl Murphy (2:20.93).

Tudhope’s attention now turns to the X-Games where he will join the world’s best Winter sport athletes in Aspen in the United States.

Tudhope is part of a very select group of athletes chosen to compete in the first ever Para-snowboard event at the X-Games, where he will be become the young Para-athlete in the field.