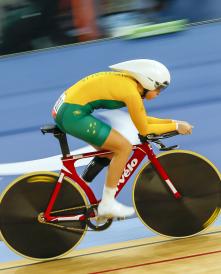 Cycling Australia is pleased to announce the Australian Para-cycling Track Team for the UCI Para-cycling World Track Championships to be held in Apeldoorn, Netherlands, from 26 – 29 March 2015.

Team Australia finished as the most successful country at the 2014 Championships held in Mexico with a haul of 17 medals including five rainbow jerseys.

Both Gallagher and Powell enter the Championship as the current world, Paralympic and national champions as well as world record holders in the individual pursuit, while Formston and Curran also boast the world’s fastest time in the pursuit.

Dual 2014 World Championship bronze medallist Alistair Donohue (VIC) will return to the track after claiming bronze in the under 23 men’s road race at the Mars Cycling Australia Road National Championships.

The team also welcomes back 2012 world champion and Paralympic Games silver medallist Bryce Lindores (QLD) who returns after a year away from the sport with a new partner in Mark Jamieson (TAS).

The team will take part in a training camp in Adelaide from March 8 and will depart for the Netherlands on March 17.

Note that special considerations may be given by selectors for other tandem pairings after the conclusion of the 2015 Subaru Track National Championships to be held in Melbourne, January 28-31.