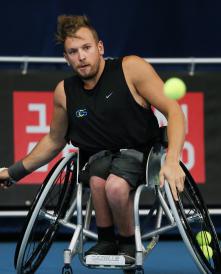 World No. 2 Dylan Alcott and world No. 5 Jamie Burdekin will meet to decide who wins the first quad singles title of 2015, having both remained unbeaten after their first two round-robin matches.

With the decider for the quad doubles set to take place on Friday’s third day of play, the respective doubles partners met each other in singles completion in Thursday’s second set of round-robin matches, with Alcott defeating Britain’s Antony Cotterill 62 62 and Burdekin overcoming Shota Kawano 62 64.

Meanwhile, the four seeded players all made confident 2015 seasonal debuts to reach the women’s singles semi finals. World No. 8 Katharina Kruger and world No. 10 Lucy Shuker will meet for a place in the final after German top seed Kruger eased past Sarah Calati 61 62, with third seed Shuker earning a 61 61 win over Miho Nijo.