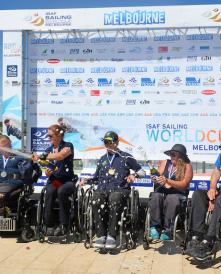 SKUD18
2014 IFDS World Champions Daniel Fitzgibbon and Liesl Tesch had a great run in the SKUD18 this week, winning all but one of ten races.

“Today’s racing was a fantastic end of the regatta, we could have come third but we nipped over the line just a tiny bit ahead of the Kiwis and won the regatta.  We only had firsts and dropped a third”, an excited Liesl Tesch said after racing.

About the event as a whole she added: “It has actually been a really fruitful week as far as our training went, plus we had loads of different weather situations and I think the Australian fleet is getting stronger, which is really exciting. We had ten boats out there and it was fairly competitive, so that’s a nice challenge going forward.”

Skipper Daniel Fitzgibbon added: “It’s been a long week but we were happy with how we sailed. We try and get better every time and it’s been a very valuable week for us. We’ll have Christmas off and then we go to the Miami OCR in January, then we  shift the program over to America.”

“Todays racing was great. I’ve sailed in today’s wind direction quite a few times in Melbourne and I knew what I had to do and executed my plan, and it worked perfectly,” Matt Bugg said after the event.

“This was actually the best event I have had in Melbourne, we haven’t missed a day’s racing due to too much wind or not enough and the weather has been fantastic.”

Melbourne kick starts the ISAF World Cup series before the sailors head to the USA, France, Great Britain and an Asian venue.  The series will culminate in the 2015 ISAF Sailing World Cup Final Abu Dhabi.

Photo with thanks to Jeff Crow.