The logistics of global para-equestrian 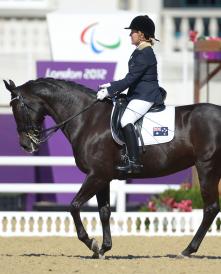 Team Australia give an insight in to the challenges faced taking part in global para-equestrian competition.

One of the biggest challenges facing any para-equestrian dressage rider is the logistics of travelling, with a horse no less, the many kilometres needed to compete and gain experience at the top level.

For those based in Europe, still the natural centre of the sport, those challenges are hard enough. Imagine then, the size of the task faced by those thousands of miles away – in Australia!

For Team Australia and Grade IV rider Nicole Blanks, however, there was a simple solution leading into August’s Alltech FEI World Equestrian Games 2014. She came to Europe for the summer season to train and ride.

“I bought my horse in February last year,” she said, “and I’ve been travelling back and forth from Australia to Holland to train and compete since then. This year I had seven trips and 16 weeks riding him. I’m racking up the air miles.”

It is not just coming to Europe that can be a challenge either – Australia is, after all, one of the largest countries in the world.

Juliet Battams, Australia’s National Performance Director for the Dressage and Para-equestrian Dressage, said: “We have athletes based in Perth, Melbourne, Sydney, Brisbane, Adelaide – all over the country. Some travel 60 hours to get to a competition. We have one major competition every two years but we’re going to increase the number and level of competitions we offer and run para competitions alongside able bodied competitions.”

Battams and her colleagues have identified that the lack of high end competition experience is what her predominantly young team of riders lack. She hopes that the integration of para-equestrian dressage into other dressage competition will help.

“We could have a situation where the Perth based riders can’t come across to compete in Melbourne but they can compete in open competition in Para classes which makes it much more accessible to them,” she said. “But to be fair, because when we compete we always have to travel we are quite good at it. Everyone’s panicking about how they are going to travel to Rio but we’re like ‘Hey that’s a bonus for us’ because we’re good at it.”

For most of the team, participation at this year’s World Equestrian Games was their first taste of global competition and it is one they clearly all relished producing solid, scores.

Battams added: “A lot of it was about their first experience. One of the most interesting things we did was go through the ‘what if’ scenarios – what if this goes wrong and what if this happens and this turns up?

“And some of those things did happen but instead of having a meltdown they looked at each other and went ‘cool we’ve practiced that’ which was good.”

Also on the team, however, was the more seasoned campaigner and London 2012 gold medallist Joann Formosa. Adelaide-based rider Elizabeth Sobecki said of Formosa: “She’s been a real big sister to me and it’s so comfortable to know she’s ‘been there, done that’. If I have questions she takes me in the corner and says ‘Lizzy, calm down, that’s how it’s going to go’.”

For now the team is looking forward to both Rio 2016 and, further ahead, Tokyo 2020. And as far as the distance is concerned? “A flight,” said Battams, “is just a flight.”