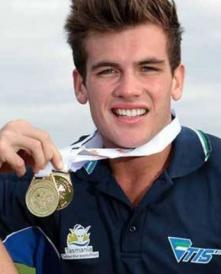 Tasmania’s Deon Kenzie has run faster than any Para-athlete before him, clocking a new 1500m world record in the T38 classification of 4.08.51 in Hobart on Saturday afternoon.

Kenzie had previously won a bronze medal in his classification for the 1500m at the IPC World Championships in Lyon (FRA) in 2013 with a time of 4:14.21.

That event was his international debut, but the 18-year-old showed just how far he had come since, as he ran faster than any other man before in his class.

Kenzie, who has cerebral palsy, is the reigning Tasmanian Under-18 Athlete of the Year and in October at the Tasmanian All Schools Track and Field Championship at Penguin, registered a new personal best time of 4:09.58.

That run signalled his intention of breaking the existing T38 1500m world record of 4:09.50, which has been held by Abbes Saidi of Tunisia since July 2005.

Kenzie’s coach Mike Gunson said the conditions were excellent for his charge’s record run at The Domain track in Hobart.

“The conditions, would you believe it, were perfect at the Domain. 25 degrees with maybe a 15 to 20 kilometre win, but the conditions were basically very good,” said Gunson.

Kenzie drove from Devonport to Hobart for the race, and competed against a field of 15 able-bodied athletes, coming second overall in the race.

“Deon and I both live in Devonport, so we made the journey down to The Domain, because we knew there would be a good field of athletes,” Gunson said.

“As it turned out the conditions were, not perfect but pretty good.  I think sometimes just moving away from your home track … we don’t have a lot of athletes.  We set ourselves up to do it, we made it public, and from an IPC point of view we had three television cameras here filming the event so it’s good for athletics in Tasmania. It’s just good for para-athletics.”

“He must have come home in about 50. So that was the race plan and he followed it very well.  The first one was 65, 67, 66 and then he’s come home in 50, He’s a very good judge of pace and basically he was smack on the pace the whole way. The wind was quite strong at The Domain, so it wasn’t an easy race.  He paced himself well and just had enough in reserve to come home hard.”

Gunson said Kenzie’s next major race would hopefully be at the 2015 IPC World Championships in Doha, Qatar.

“The plan for next year will be obviously to qualify for the IPC World Championships in Doha in October.  I guess if you’ve just broken the world record, I don’t reckon qualification will be an issue.  And then satisfy all those bits and pieces and then his next major race will be in Doha.”

Kenzie’s new world record will need to be ratified as official by the IPC.

Photo with thanks to Athletics Australia.