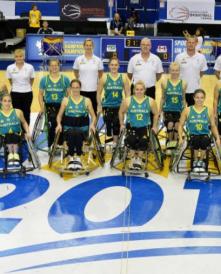 The selected squad of players have already begun the long road to Rio 2016, and this group of 17 athletes will form the core of the Australian Gliders team that will go a long way to representing Basketball Australia at the Asia Oceania Qualifiers in Chiba, Japan in October 2015.

Player selections are based on the recent performances at the Toronto IWBF World Championships, their commitment and work in the daily training environment, their individual and team performances throughout the WNWBL season and reporting to the Athlete Management System.

Gliders Head Coach Tom Kyle commented on this camp; “I’m really excited about our camp next week. We have a few new faces that are set to impress plus a number of experienced campaigners from the recent world championships who are keen to get to work to avenge their 6th place finish.”

This AIS camp is the final event for 2014 and will lead the Gliders squad into their next 4 day Australian camp from 12-15th January on the Sunny Coast, providing a good training opportunity and leading into the Sunny Coast Challenge Tournament up in Caloundra, where all team members will compete and take part in tournament play from 16-18th January.