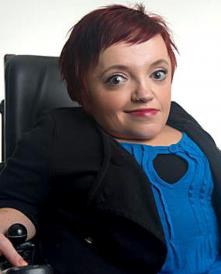 The Australian Paralympic Committee (APC) is saddened by the passing of disability activist Stella Young.

APC Chief Executive Jason Hellwig said the Australian disability community has lost one of its most prominent and passionate spokespeople.

“As a disability advocate, writer, comedian and contributor to the ABC’s disability news website Ramp Up, Stella was never afraid to tell it like it is, to challenge people’s perceptions and to fight for what she believed in,” Mr Hellwig said.

“She will be sorely missed by many people connected with our movement and our organisation.

“Our thoughts are with Stella’s family, friends and colleagues at this very sad time.”

Mr Hellwig also acknowledged that the Paralympic movement had lost a strong supporter.

“Stella travelled to London with the ABC to cover the 2012 Paralympic Games,”

“The insight Stella was able to provide was a great asset to the ABC’s coverage because of her ability to look critically at the wider impact of the Paralympic Games.

“It is not just about the athletes, the sports and winning medals, it is about so much more than that. Stella knew that better than most and that was reflected in the depth and quality of the stories she told.”