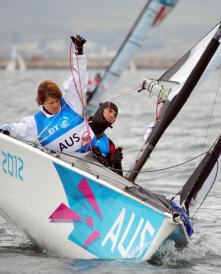 The 2011 Australian of the Year  Simon McKeon AO has officially launched the 2015 IFDS Disabled Sailing Combined World Championships, to be hosted by the Royal Yacht Club of Victoria in Melbourne  from 26 November – 3 December 2015.

The event, which will be a final country qualifier for the Rio 2016 Paralympic Games, is expected to attract nearly 100 entries from 30 countries.

Speed sailing pioneer and a Founding Patron of the Australian Sailing Team McKeon said: “A regatta of this size and international profile really reinforces Victoria’s reputation as the sporting capital of the nation, and it is great to see another world-class sailing event being held on Port Phillip.

“Events such as the 2015 IFDS World Championship have great potential to deliver significant economic and cultural benefits to the community, as well as corporate partners.

“Therefore, it is important for industry and the local community to get involved with the event, supporting the host club, the Royal Yacht Club of Victoria.”

The Mayor of Hobsons Bay, Cr Colleen Gates has confirmed her position in promoting the growth of maritime activities within the city.

“Support of the IFDS World Championships, a significant international event, is consistent with the Council’s strategic objectives in Economic Sustainability, specifically delivering on its tourism potential. It is expected that the event will have a significant positive impact on many local services including tourism, hospitality, retail and marine businesses and operators.

“The IFDS World Championships also represents a wonderful opportunity for the Council to promote its commitment to diversity and opportunities for all, by welcoming the ‘best of the best’ of disabled sailing to Port Phillip.”

The host club, Royal Yacht Club of Victoria, is situated in the inner West of Melbourne, only a stone’s throw from the Melbourne CBD. The club is no stranger to major events, having hosted many successful World, National and State Championships in the past.

Event Chairman and Paralympic gold medallist Michael McLean, said that planning at the Royal Yacht Club of Victoria is really taking shape for the November 2015 regatta.

“The Royal Yacht Club of Victoria is proud to deliver this significant event with the substantial support of the State Government, Hobsons Bay City Council and Accor Hotels,” Mr McLean said.

“As the event is the final country qualifier for the Rio Paralympics in 2016, we are expecting over 30 countries will be represented, across more than 90 Disabled Sailing class entries. This will see the club playing host to up to 150 athletes and 350 support crew, families and supporters, most of these staying with our official hotel partner Accor.”

The event will form an important step in the preparations for many national teams as they prepare for the 2016 Rio Paralympic Games.

Four-time Paralympic medallist Leisl Tesch and partner in the Skud18, Dan Fitzgibbon have already confirmed that they will be in Melbourne next November to defend the title that they won earlier this year in Halifax, Canada.

“No pressure on us as the defending World Champions…. Well, the big target will be on our back after our Paralympic gold medal first, then 2014 World Champion, so watch this space.

“It’s absolutely fantastic to have the Worlds Championships here in Australia. It will be the chance for Australians to have a look at top level, fantastic racing. And what an honour to have it down here on beautiful Port Phillip.”

The partnership are early into their next Paralympic campaign together after taking a break post the 2012 Paralympic Games.

“We got a bit of water under the bridge before next year and it will be nice to have the event down here in Australia. And hopefully we’ll even get some fans to come out and see some great Paralympic sailing out here for the first time. It will be fun.”

Tesch sees it as part of her role as event ambassador to help promote the event.

“It would be nice to get some Melbournians to come out on the accessible boats, to come and have a look; also to get some Paralympians from other sports out, to come to one of the best sports,”

Who knows, maybe we can get Kelly Cartwright sailing in the World Champs too (wink).”