Steelers to tackle USA in a five-match series 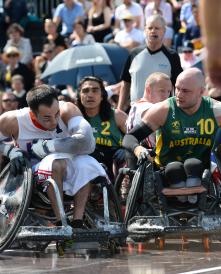 Australia’s up and coming wheelchair rugby players will have an opportunity to fine-tune their skills as they take on the USA in a five-game series in Alabama next week.

Ranked as the world’s number one team, the Steelers will leave behind five of their most experienced players who are training for the Wheelchair Rugby National Championships, giving the USA a competitive advantage.

Despite the challenge ahead, Head Coach Brad Dubberley said there is still a chance for the team to come up strong.

“The team is falling short of the USA by thousands of international games in terms of experience, which may have an impact on results.

“It will be tough for the boys to win but in saying that, I’m prepared to be surprised,” Dubberley said.

Dubberley, who led the team to its first ever victory at the IWRF Wheelchair Rugby World Championships in Odense, Denmark in August, said that despite their chances, he has encouraged the Steelers to treat the tournament as a preparation tool ahead of Rio.

“We’ll have six more training sessions on the ground, but it’s important that the boys see this as a vital part of preparation for Rio, rather than focus on the results,” he said.

While Australia is firmly ranked higher than the USA, the Steelers have a stark rivalry with the world number three team – the USA has won each game against Australia since the sport was introduced into the Paralympic program in 2000.

“It will be great to see the whole team step up. I’m encouraging them to do it for not only the experience, but so they can defeat their USA counterparts once again,” Dubberley said.

The team will depart for Alabama today to train in a three-day camp, before the tournament commences on Tuesday, 7 October.