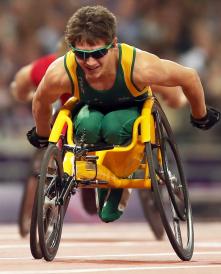 With the inaugural Para-sports Draft coming to a close, Para-athletes in Brisbane and Hobart are encouraged to register their interest now to secure a spot at the final two testing days for 2014.

The Para-sport Draft has travelled to Sydney, Melbourne, Adelaide, Perth and Canberra, and so far has attracted more than 100 participants, including elite athletes.

Despite the high quality of talent seen thus far, Australian Paralympic Committee (APC) Performance Talent Manager Tim Matthews says the Draft will not commit to supporting anyone until all testing days have been completed.

“We have been introduced to 15 potential high performance athletes so far but we aren’t committing to these applicants until we know how many potentials we have throughout the country.”

Standout athletes have been found in each city, all of whom have different amounts of experience in sport.

“The testing day in Canberra saw us meet one young guy with cerebral palsy who ran 13.4 in the beep test. There have been a few others with significant potential too, that have been playing able-bodied sport, and haven’t previously been exposed to Para-sport,” Matthews said.

Also among the 15 Paralympic hopefuls are athletes who have had previous experience in Para-sport but may not have had the success in one sport, or guidance to try out others.

“There are a few athletes who have not been successful at high performance level, and a few that haven’t reached a high performance level as yet, but we’re looking to transfer them into other sports where there is either less depth or it is more suited to the individual for various reasons.”

While talent is yet to be discovered in Brisbane and Hobart, the Australian Paralympic Committee will give athletes direction to be classified and linked with an appropriate club and coach.

“Once the testing days are all over, we’ll be monitoring all of our potential athletes closely,” Matthews said.

“The next stage in the process for most is getting them classified and linked with an appropriate club and coach. From there, their own performance and commitment may determine how far they progress.”

The Para-sports Draft invites anyone between the ages of 15 and 30 with neurological impairments such as cerebral palsy, multiple sclerosis or an acquired brain injury to register.

For further information and to register, please visit the below link:
ausport.gov.au/ais/australias_winning_edge/para_sports_draft