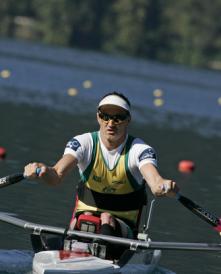 Australian rower Erik Horrie has been named as World Rowing’s Para-Crew of the Year for 2014. Horrie received his award on Friday, 8 November in Rio de Janeiro, Brazil at the World Rowing Coaches Conference Gala Dinner.

He beat off competition to claim the title from last year’s winners and fellow Australian rowers Kathyrn Ross and Gavin Bellis as well as Norway’s Birgit Skarstein.

Horrie has been very successful in his rowing career, since switching over from wheelchair basketball in 2011. That year, he took world championship bronze, followed by silver at the London 2012 Paralympic Games.

The Australian was nominated for the award after he successfully defended his 2013 world title in arms, shoulders men’s single sculls (ASM1x) at the 2014 World Rowing Championships in Amsterdam, the Netherlands.

Horrie, who is coached by Jason Baker, was in Rio de Janeiro to collect his award said: “This rounds off a great 2014 for me and I am overwhelmed and extremely honoured to be receiving this accolade.

“I was nominated alongside two fantastic crews, including of course my team-mates Kathryn and Gavin, and to all the nominees I would like to say congratulations.”

The Sydney Rowing Club member, who has been in Rio training ahead of last night’s award ceremony said: “It’s been fantastic to come out for a few days and be able to do some training in the city that will host the 2016 Paralympic Games. Hopefully if all goes to plan with Paralympic qualification next year in Aiguebelette I’ll be back here again in 2016 in a bid to win a Paralympic gold.”

Rowing Australia High Performance Director, Chris O’Brien, said: “I’d like to congratulate Erik on winning this year’s award and also his coach Jason for their achievements over the 2014 season.

“Erik, along with Kathryn Ross and Gavin Bellis, have won consecutive world titles in 2013 and 2014, while debutants Jeremy McGrath and Kate Murdoch claimed silver at this year’s World Rowing Championships in Amsterdam, all signs that indicate the Australian para-rowing program is going from strength to strength and long may it continue.”