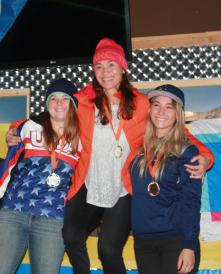 The rise of Australia’s young Para-snowboarders continued at the IPC World Cup overnight with a medal winning performance from Joany Badenhorst and a career best from Ben Tudhope in Landgraaf, The Netherlands.

Following her Games-ending crash at Sochi 2014, Badenhorst proved that she’s a force to be reckoned with by outclassing her more experienced rivals, only finishing second (1:27.89) to all-conquering Paralympic champion Bibian Mentel-Spee (1:14.09).

Despite the 13.8 second gap between first and second place, Badenhorst beat her bronze-winning Europa Cup time from the previous day and has shown that over time she has the potential to close the gap between her and Mentel-Spee.

Badenhorst outperformed both Heidi Jo Duce (USA), who had defeated her just one day prior, as well as Lisa Bunschoten (NED).

For 14-year-old Tudhope, his time of 1:18.46 was less than a second behind Canada’s John Leslie, and 12.97 second behind Paralympic gold medallist Mike Shea.

Tudhope has been invited to compete at the Winter X Games in Aspen, USA in January, and will be aiming to once again stun his competition with better results.

Former sprinter and London 2012 Parlaympian Simon Patmore made his debut at an IPC event in the Men’s Banked Slalom Upper Limb impairment class, placing 10th.  Patmore has shown immense promise in his first international season and improved run by run.

As a team, Australia has more podium finishes in sight. Badenhorst and Tudhope will be competing at the next IPC Para-snowboard World Cup in Aspen, USA from 11-13 January.