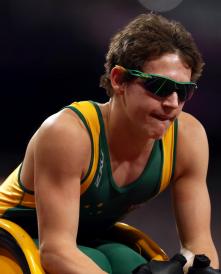 The inaugural Para-sports Draft is successfully underway, with a quarter of participants at the first testing day showing they have the potential to become Paralympic athletes, says Australian Paralympic Committee (APC) Performance Talent Manager Tim Matthews.

“The testing day in Victoria was our first and it was as good as we’d hoped for. We have four people who we believe have what it takes and who were completely unknown to the APC, and I’m looking forward to seeing them continue on their Paralympic pathways,” Matthews said.

The recruitment drive developed by the APC and Australian Institute of Sport is initially focussing on individuals with neurological impairments as this is where many medal opportunities exist in a range of sports, and the talent discovered at this first day may assist in filling a number of known pathway needs and opportunities across a range of Para-sports.

“The successful participants are likely to fit into classifications where medal opportunities currently exist, but most importantly, they had many of the traits and characteristics we see in successful Paralympians, so we know they have the potential to go the distance,” Matthews said.

Out of the four recruited for the next stage of the Para-sports Draft, Matthews says there are a few that have shown real potential and impressed the attending across a number of sports, proving the Para-sports Draft is an opportunity for both the participants and for future Paralympic Teams.

“Two or three of the participants showed potential for a range of sports and where they fit within the classification system may ultimately determine their potential to succeed. but The great thing is we could have two more potentials for the athletics team, one or two rowers, two potential cyclists and Para-canoe was interested in each of the four individuals – a sport only making its debut at Rio,”

“We’re already onto the next steps with all four participants. Together with the AIS, we’re working on linking them with an appropriate coach, club and program and we will be closely tracking and monitoring their progress over the next twelve months,” Matthews said.

While there were many individuals who aren’t likely to make future Paralympic teams for a variety of reasons, Matthews said the Para-sports Draft was still a great opportunity for them to get involved in Para-sport and experience the positive physical and social benefits that sport has to provide.

The program also enables individuals to better understand which Para-sports they are likely to be eligible for and enable them to make more informed choices about their own sporting journey and assist in achieving at the highest level their talent enables them to.

“There were quite a few participants who had never participated in Para-sport before and while they might not be necessarily be what we’re looking for inthis particular program, there are avenues to continue on with sport through their local clubs,” Matthews said.

Following the success of the first Para-sports draft testing day in Melbourne, Matthews says he looks forward to seeing the potential at the Sydney testing day this weekend.

“We’ve had a good response in NSW, with more 35 participants registered for Sunday. More than half have shown interest in Para-athletics, with Para-cycling a close second so it will be interesting to see who tests well on Sunday in Sydney,” said Matthews.

The NSW testing day will be taking place this Sunday, 26 October at Sydney Academy of Sport and Recreation in Narrabeen.

To register for the Sydney testing day or other upcoming testing days in Canberra, Adelaide, Perth, Brisbane and Hobart, visit: ausport.gov.au/ais/australias_winning_edge/para_sports_draft