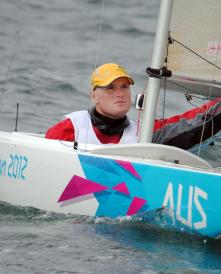 Daniel Fitzgibbon & Liesl Tesch
In December 2013, Dan and Liesl, 2012 SKUD 18 Paralympic Champions, commenced their campaign towards the Rio 2016 Paralympic Games with the goal of defending their Gold medal. In August the pair became World Champions taking home gold for Australia in the SKUD 18 class at the 2014 IFDS World Championships. This is the first SKUD 18 world champion title for the pair, having placed 2nd or 3rd at all previous IFDS World Championships. This great result has qualified Australia a position in the SKUD 18 at the 2016 Paralympic Games.

The duo are a true inspiration and their passion for sailing and sport is evident in their contribution to programs around the globe. Post world-championship win, Dan and Liesl travelled to Japan to assist in the development of the disabled sailing program in Hiroshima with the aim to expand on the existing program and bring disabled and able-bodied sailing together. Dan’s development of the Integrated DisAbled Sailing at Royal Prince Alfred Yacht club, a yacht racing program that integrates disabled and able-bodied sailors, with or without sailing experience, and Liesl’s commitment to ‘Sport Matters’, a non-profit organisation that is dedicated to making a difference in people’s lives using the power of sport as a tool for development, allows them to continue to give back to their sport.

Australian Sailing Team – Daniel Fitzgibbon, Liesl Tesch, Colin Harrison, Jonathan Harris, Russel Boaden & Matthew Bugg
The Kinsale Yacht Club Perpetual Trophy also known as ‘The Nations Cup’ is awarded at each IFDS World Championship to the best performing nation across all Paralympic classes. It is scored by taking the top competitor from each nation in the three Paralympic classes; SKUD 18, Sonar & 2.4m, this year Australia narrowly beat Great Britain by one point, with the team brining home a 1st, 3rd and 5th overall.

This is the first year Australia has won the trophy, with a very strong team at the 2014 IFDS World Championships. Daniel Fitzgibbon & Liesl Tesch were 1st overall in the SKUD 18. The team of Colin Harrison, Jonathan Harris and Russell Boaden finished 3rd in the Sonar class and Tasmanian Matt Bugg was 5th overall in the 2.4m. These individual results qualified Australia in all three Paralympic classes for the Rio 2016 Paralympic Games.

The Yachting Australia Awards 2014 will be held on Friday, 17 October 2014 at the Australian National Maritime Museum.