Milton’s presence in the Sport Australia Hall of Fame applauded 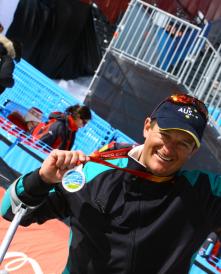 The Australian Paralympic Committee (APC) extends its congratulations to six-time Paralympian Michael Milton, who will be inducted into the Sport Australia Hall of Fame this Thursday.

Milton becomes only the third Paralympian to be bestowed with the prestigious honour.

“I congratulate Michael for not only this incredible acknowledgment, but for his significant contribution to the Paralympic movement and to Australian sport over many years,” Mr Tasker said.

“Michael’s record of success at the Winter Paralympic Games has set a huge benchmark for future generations, which he continues to help nurture through his ongoing involvement with emerging athletes.”

Mr Tasker said the accolade was another important step towards improving the under-representation of athletes with a disability within sporting halls of fame around Australia.

“Michael has had arguably the most extraordinary career of any Australian winter athlete. In 1992 he won Australia’s first winter gold medal, Paralympic or Olympic. He went on to compete at five winter Games and win 6 Paralympic gold medals. At the Salt Lake City Games in 2002 he clean swept all four alpine skiing events. In 2006 he became the fastest Australian, on one ski or two, a record that has not been broken,” Mr Tasker said.

Before this year, Louise Sauvage (wheelchair racing) and David Hall (wheelchair tennis) had been the only two Paralympians inducted among the 382  Athlete Members of he Sport Australia Hall of Fame.

“We know that Paralympic athletes account for a disproportionately low number of inductees into sporting halls of fame around Australia,” Mr Tasker said.

After losing his left leg to bone cancer at age nine, Milton became Australia’s youngest ever Winter Paralympian when he debuted at the 1988 Games in Innsbruck at the age of 14.

After retiring from Paralympic skiing following the Torino Games in 2006, Milton competed in cycling at the Beijing 2008 Paralympic Games before he rejoined the Australian Winter Paralympic Team in 2014, this time as an assistant coach.