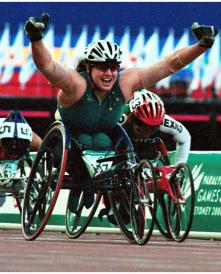 The Athletics Australia Hall of Fame was established to recognise the outstanding achievements of Australia’s truly great athletes across the course of this history and since then more than 35 people have been added to the illustrious list.

Last night as part of the Athlete of the Year Awards, decorated Paralympian Louise Sauvage was formally inducted into the Athletics Australia Hall of Fame, along with three other able-bodied athletes.

The Special Awards Committee has prepared a citation to celebrate her induction:

Louise was born in Perth, Western Australia with a congenital spinal condition called myelomeningocele. By the age of ten she had endured 21 operations.

From an early age her parents encouraged her to participate in sports. She started swimming at three years of age and began competing in wheelchair sports from age eight. At ten she became the youngest ever athlete in the National Senior Paraplegic and Quadriplegic Games in Sydney. At age 15 she took up wheelchair racing – a decision which eventually saw her became one of the world’s greatest in the discipline.

In 1990 Louise competed in her first IPC World Championships in Assen, Netherlands and won gold in the 100 metres in a new world record. Unfortunately she was disqualified for a lane violation in the 200 metres after also crossing the line first. In the same year she won five gold medals at the Stoke Mandeville Games in England.