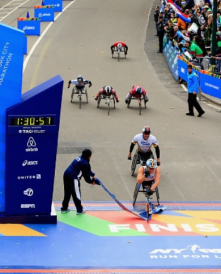 Fearnley crossed the finish line in a time of 1 hour 30 minutes 55 seconds, less than a second ahead of runner-up Ernst van Dyk of South Africa.

A pack of six athletes approached the final kilometre of the race together before Fearnley broke clear in the last hundred metres, holding on to win by less than a metre. The win was Fearnley’s fifth in New York but first since 2009.

“That was one of the toughest races of my life,” Fearnley said.

“This race is the highlight of the schedule every year and the feeling of winning here again is just indescribable.”

The wheelchair race was in danger of starting at all this year, with strong winds causing a safety risk for competitors. It was decided the wheelchair athletes would compete over a course shortened by three miles (approximately 4.8km).

“The wind blows you around so much and cross winds can be particularly dangerous. The first 25 kilometres or so were straight into it today which made the going tough,” Fearnley said.

“The weather is one of those things that’s completely out of your control so you just deal with what gets thrown at you on the day.”

“Today the marathon gods made us work extra hard which makes the win that little bit sweeter.”

Fearnley’s win in New York caps off a successful 2014, sitting alongside a victory in the Sydney Marathon, a runner-up finish in the Chicago Marathon and a Commonwealth Games Silver Medal. His greatest achievement this year, however, was becoming a father for the first time with son Harry born in March.

“Looks like I’ve got myself a new lucky charm. I think I’ll have to throw the little fella in the luggage every time!”