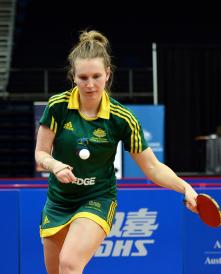 Awarded the title of “Best ITTF Continental Event” at the ITTF’s AGM in May this year for its 2013 edition, the ITTF-Oceania Cup will be hosted in the City of Greater Bendigo, Australia for the third time next year.

“This is a unique first and Bendigo is delighted to support this inclusive event to break down the barriers of inclusion for athletes with a disability and provide an opportunity for them to play at the highest competitive level,” said City of Greater Bendigo Mayor, Cr Barry Lyons.

“Bendigo has the runs on the scoreboard when it comes to hosting major sporting events. Our collaboration with the ITTF and Table Tennis Australia is developing into a key relationship for the city, we are enjoying playing a part in developing the sport of table tennis, locally, nationally and internationally.”

ITTF Executive Vice President Patrick Gillmann added “Following the previous years’ success in hosting the ITTF-Oceania Cup, Bendigo has also been awarded the Oceania Para-table Tennis Championships. This is a great addition to an already successful event, and I look forward to seeing the integration of the athletes at an international level, and playing together side-by-side.”

The upcoming 2015 edition will see not only top players from the Oceania Region battling it out to represent the Continent at the 2015 ITTF World Cups, but also witness Oceania’s para athletes fighting for their places at the Rio 2016 Paralympic Games.

“Both organisations have been working hard on developing Para-table Tennis in Oceania over the past 12 months through the “Smash Down Barriers” Table Tennis Disability program, funded by the Australian Government. This event will be a unique opportunity to witness the best players in Oceania compete either to qualify for the 2015 World Cups or for the 2016 Paralympic Games.”

Since 2013, the Oceania Para-table Tennis Championships was created after its separation from Asia, with its first event held in Canberra, Australia in 2013. The second edition, which will be integrated with the ITTF-Oceania Cup, will see up to 21 athletes qualify for the Rio 2016 Paralympic Games directly.

On this first ever integrated event, Australian Paralympic Committee CEO Jason Hellwig commented that “Not only is it exciting that we’ll be able to see our Para-table Tennis athletes qualify for Rio right here at home, but the fact that they will be playing next to Australia’s able-bodied athletes side-by-side is a huge step in Paralympic sport becoming a major part of Australia’s sporting identity.”

“This combined event is the perfect way to display Australia’s leading para athletes alongside able-bodied athletes and the professionalism that they both bring to the court,” said para athlete Melissa Tapper, who competes in both para and able-bodied events.

“It’s important that every athlete’s ability would be able to be put on show rather than the disability, and I think next year’s ITTF-Oceania Cup and Para-table Tennis Championships will showcase it perfectly.”

“This upcoming event will be even more special and exciting as prize money has been increased for the players, with strong support from ITTF and TMS International,” added OTTF President James Morris.

“I am very proud to say that ITTF-Oceania is leading the way globally in integrating high level Para-table Tennis with able-bodied events.”