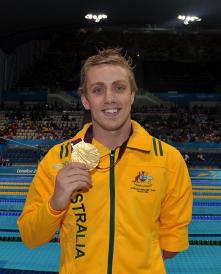 With a staggering 27 world records between them, Cowdrey, Freney and Paton have achieved what many only dream of in Paralympic Swimming.

At just 25-years-of-age, Cowdrey has a medal collection many would envy; with a total of 23 Paralympic medals from three Paralympic Games (2004, 2008 and 2012), including 13 gold, 16 IPC world championship titles and an outstanding 13 world records to his name.

Cowdrey said last night was a very proud moment in his career.

“It’s great to now see Paralympians and Olympians side by side on the Path of Champions and for any swimmer to get this recognition is a great honour,” Cowdrey said.

While Paton, a five-time World Champion from 1998, became Australia’s Paralympic golden girl at the Sydney 2000 Paralympic Games when she picked up a total of six gold medals and set six world records in the process.

Paton’s impressive record stood until 2012 when at the London Paralympic Games it was Freney’s time to shine. The 22-year-old did just that when walked away from London 2012 with a total of eight gold medals to her name, eclipsing Paton’s record haul with two more gold medal winning swims.

Swimming Australia Paralympic Performance Manager Adam Pine said all three inductees were deserving of the status of champion and each had gone above and beyond and had set the standard for Paralympic swimming success.

“Matt, Jacqui and Siobhan are very deserving of a place in the Path of Champions and each of them during their careers have eclipsed expectations and set the standard for Paralympic swimming both nationally and internationally. It is great to see our first Paralympic champions recognised alongside the legends of our sport and with the strength of our current Paralympians, I hope we see many more swimmers joining them in the future.

Swimming Australia CEO Mark Anderson said it was tremendous and appropriate for our Paralympic Champions to be recognised for their amazing achievements in the sport.

“The Path of Champions is one of the highest honours in our sport and it’s great to see our Paralympic Champions also receive the recognition they deserve. Matthew, Jacqui and Siobhan have all achieved exceptional results in the pool and have proven themselves to be true champions both in and out of the water. I have no doubt that their induction into the Path of Champions and their contribution to the sport of swimming will inspire athletes for generations to come,” Anderson said.