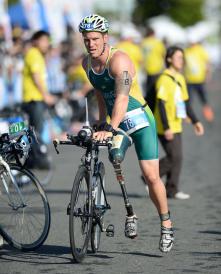 The International Paralympic Committee (IPC) has announced the final three of the six medal events that will be contested in Paratriathlon’s debut at the Rio 2016 Paralympic Games.

The men’s PT2 and the women’s PT2 and PT5 were approved by the IPC Governing Board at a meeting in Berlin, Germany, on Monday (6 October), being held in conjunction with the IPC’s Strategic Gathering to mark the organisation’s 25 year anniversary.

The events join the men’s PT1 and men’s and women’s PT4 sport classes announced in July 2014. The overall programme represents an even split of medal events across genders.

Following July’s announcement, the ITU and IPC have been working together to analyse the remaining sport classes and identify the final three medal events for para-triathlon’s debut at Rio 2016.

Para-triathlon joins para-canoe as the second sport to be held at the Paralympic Games for the first time in 2016.

Around 4,350 athletes from more than 160 countries will travel to Rio to compete in 528 medal events in 22 different sports.