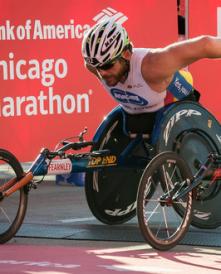 Fearnley finished in a time of 1 hour 32 minutes 13 seconds, just one second behind winner Josh George of the United States and with the same time as third placed Ernst van Dyk of South Africa.

A four-time Chicago winner, Fearnley was disappointed not to win but glad to be back on the marathon circuit.

“It’s always a tough hit out here in Chicago after a long winter at home,” Fearnley said.

“To have 12 blokes in the final pack into the last kilometre always makes it a bit dicey and Josh hit the lead at the right time and held on well.”

“It was a very strong field and second place is a good result but you come here to win so it gives you that little bit more hunger for next time around.”

Next time around for Fearnley is the blue riband of wheelchair marathon racing – November’s New York marathon in three weeks time.

“New York is the pinnacle of the sport. It draws the strongest field and is the toughest race,” Fearnley said.

“The 12 who finished at the front here today will be there plus another 12 who could win on any given day.”

Fearnley is a four-time New York winner but his last win came five years ago in 2009.

“I’ve been in good nick the last few years but have had a cyclone, a broken chair and the fastest bloke to ever race get in the way.”

“I’ll approach the race the same way as I do every year. I’ll put everything I have out there and see where that leaves me.”