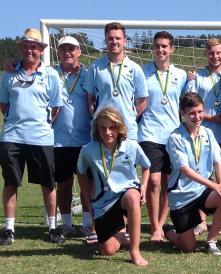 It was evident that NSW was determined to defend its title from the start of the match; Harrison Dowdell, one of the team’s newest players, scored in the 7th minute, and Jack Williams followed up with another goal in the 20th minute.

The NSW team went further ahead in the 32nd minute through a brilliant strike by the NSW Captain and former Pararoo Chris Pyne. It wasn’t long before NSW put the game almost out of the Queenslander’s hand when 14-year-old Harrison Dowdell scored his second goalfor the match.

The 56th minute saw a penalty spot after a hand ball by NSW, which gave the Queensland captain the opportunity to score the team’s only goal.

The final score between the two teams was 4-1.