Two years to go: Australian Paralympic Committee invites the nation on the road to Rio 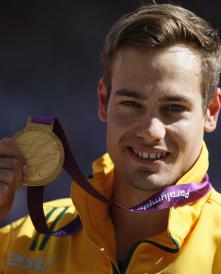 Sunday, 7th September marks the two-year countdown to the Opening Ceremony of the Rio 2016 Paralympic Games.

To announce the milestone, the Australian Paralympic Committee (APC) is calling for the nation to get behind the Team as it embarks on the road to Rio.

APC CEO Jason Hellwig said that although the Team will be aiming to win as many Gold medals as possible, success is equally about the impact the athletes have on the hearts and minds of the Australian people.

“The community response following London was incredible, it showed the best of the Australian spirit and in turn Paralympic sport is becoming a major part of Australia’s sporting identity.  We want to see this continue.

“We want people to continue sharing the highs and lows that the Team experience, and we want to show that the Paralympic movement has the ability to change lives and attitudes,” Hellwig said.

Hellwig, who has been CEO of the APC since 2010 and has been announced as Chef de Mission for Rio 2016, continuing the role he had in London 2012, said that Australia has always been a strong Paralympic nation however without the community support, the Team will face challenges.

“The Australian Paralympic Team have targets to meet and one thing we learnt from London is that the Paralympic Games is becoming an increasingly competitive landscape at the elite level.

“The curve is heading upwards, making it harder to win medals, but it’s our job to support every Australian athlete and give them the best chance to deliver their best performance when it matters most – at the Paralympic Games,” Hellwig said.

With more countries placing a greater focus on Paralympic sport and investing significantly greater resources into their Paralympic systems, the APC has embarked on a transformation of its commercial and sport strategies.

“It’s our challenge now to secure funds to prepare our Team and to also make sure that we are constantly building the sporting pathways for people with impairments from community level through to the elite layer, and hopefully for life.

“We want to send as many athletes to Rio as possible to increase our chances of a top five finish, but we need as many people to support our fundraising efforts as possible, and as many businesses to join the Paralympic corporate family.  It is an extraordinarily positive and impactful thing to be part of and support,” said Hellwig.

With two new sports making their debut at Rio, Para-canoe and Para-triathlon, and with new talent identified as strong contenders for medals by both their National Federations and the APC, Hellwig believes that now is a great opportunity to show support and track their progress right up to Rio.

“Australia has some great emerging talent in all of our sports and all of them have the potential to become household names.

“I encourage people across the nation to get right behind us from the start, and make the road to Rio as much a journey for everyone as it is the Team’s,” Hellwig said.

The last few months have seen Australia win World Championship titles in sports including wheelchair rugby, Para-triathlon, Para-sailing and Para-cycling but as Chef de Mission of the games, Hellwig also believes that there is always progress to be made.

“We’ve come close to or are at the top of many sports, but the two year mark means it’s time to increase efforts in support of our athletes and coaches. I really look forward to seeing our progress as we head into these final two years.  I think we will make Australia very proud.”