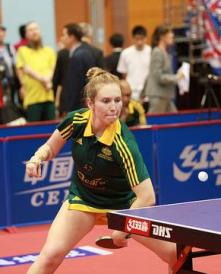 The 2014 International Table Tennis Federation World Para Championships has concluded overnight and Australia has come out triumphant, with Melissa Tapper taking home a bronze medal in the Class 10 singles event.

After emerging as number 1 in her group, Tapper found herself up against  China’s Yiang Qian, and was unable to keep up the momentum of her three victories in the preliminary rounds.

The 24-year-old lost to China in all four sets, but acknowledges that there is work to be done at home to ensure she succeeds at Rio.

“I need to work harder, and I’m looking forward to the next Paralympic Games,” Tapper said.

Tapper, who was a member of the bronze medal winning team at the Commonwealth Games, played for Australia at the London 2012 Paralympic Summer Games and is currently ranked at fourth in the world.