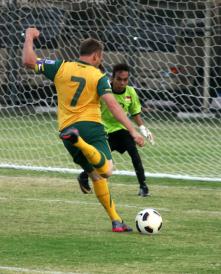 Reigning champions, New South Wales have come up strong on day two of the 2014 National Paralympic 7-A-Side Football Championships and are on the way to winning their 10th title.

Up against a determined Victorian team, New South Wales opened up the scoring ten minutes into the game. It was only the goalkeeping of Victoria’s Christian Tsangas that kept the team to two goals in this exciting first half.

In a tough second game against last year’s finalist Queensland, NSW player Jack Williams scored the game’s only goal in the 15th minute of the match.

Queensland’s captain Jarrod Larkins-Law received a yellow card, and minutes later received another to be sent off. A man down, the team held up their defence to prevent a confident NSW team from adding to their lead.

The second day of the tournament also saw Victoria defeat WA in a tight match, 1-0. The two evenly matched sides both had opportunities to score throughout the game but it wasn’t until the 50th minute that Victoria ‘s Cameron Gudgeon was able to get the upper hand, to scor his second goal of the day.

The 2014 National Paralympic 7-A-Side Football Championships are taking place in Coffs Harbour and finish this weekend.