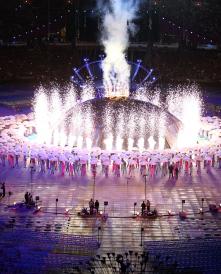 To mark its 25th anniversary on Monday 22nd September, the International Paralympic Committee (IPC) has announced that the London 2012 Paralympic Games has been voted as the number one Paralympic moment to have taken place in the last 25 years.

In the lead-up to the silver jubilee, a global search was launched asking the public to share their favourite Para-moments since the IPC was formed on 22 September 1989 in Dusseldorf, Germany.

From the hundreds of entries received, the IPC Governing Board then voted for their Top 25 moments and a daily countdown started on 29 August via a special website www.ipc25.com.

The overwhelming winner was the London 2012 Paralympic Games which broke multiple records and created seismic shifts in attitudes and perceptions towards people with an impairment.

The Games attracted a record-breaking 4,236 athletes from 164 countries. They competed across 20 sports in packed venues after a record 2.7 million tickets were sold.

More broadcasters than ever before covered the London 2012 Paralympic Games. TV pictures were beamed to over 100 countries, reaching a cumulative audience of 3.8 billion people.

Craig Spence, the IPC’s Director of Media and Communications, said: “The London 2012 Paralympic Games were outstanding; so many aspects of them have set the benchmark for how future Paralympic Games should be organised.

“They made a huge impact across the world and this is reflected in four other moments from London 2012 making the Top 25.

“I would like to thank the public for sharing their favourite moments with us, the best of which we have uploaded to an interactive map at ipc25.com.

“I think the Top 25 moments show how much the IPC, the Paralympic Movement and the athletes have achieved over the last quarter of a century, which makes what lies ahead even more exciting.”

The 25 moments as nominated by the public and voted for by the IPC Governing Board are as follows:

Full descriptions of each of the 25 moments can be found at ipc25.com