Goalballers to show off their skills at the Australian Championships 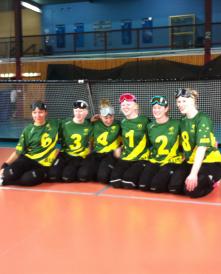 Australia’s best goalballers in each state will fight fierce as they compete for this year’s title at the 2014 Australian Goalball Championships in Adelaide this week.

Men’s, women’s, youth and junior teams across five states are set to participate, to make the 2014 Australian Goalball Championships the largest in its 34-year history. Teams will come up against reigning champions Queensland in the men’s and women’s divisions, and NSW and WA in the youth and junior divisions respectively.

The Championships will also give athletes the opportunity to play in front of Australian Team coaches Murray Elbourn and Peter Corr, who will be keeping an eye on players ahead of qualification and squad selections for Rio.

Classification, provided by the APC will also be a feature of the event. Athletes who are due for a review or do not hold a national level classification are encouraged to take up this opportunity, said Tournament Director and Australian Paralympic women’s team manager Cathy Lambert.

“Knowing the standard of each team playing, there are most definitely opportunities for players to become elite level athletes. Each of them should take the opportunity to be classified, as it’s an important part of playing at both a national and international level,” Lambert said.

Goalball, a sport exclusively for athletes with a visual impairment, has come a long way on both an elite and community level in the last four years, said Lambert.

“The increase in numbers for goalball has been incredible over the past four years. There are more players who are training and competing for positions on both the teams, and this automatically raises the standard of play across the country.”

While a new benchmark of standard has been set as more people train in the sport, national team members will need to work hard to ensure they qualify for Rio at the IBSA World Games in Korea in May next year.

“Internationally, the game has grown in the level of skill, speed and intensity, so in order for Australian teams to maintain their competitive edge on the world stage, the coaches will need to work with the players to adopt a new style of offensive play to increase their scoring opportunities and adapt to a new style of defence,” Lambert said.

The 2014 Australian Goalball Championships will be held at Brighton Secondary School, North Brighton in Adelaide from 2- 5 October.