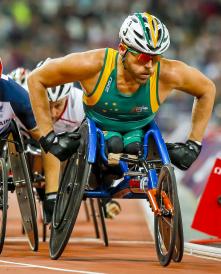 The Australian Paralympic Committee (APC) today welcomed the Australian Sports Commission’s announcement of a review into Australian athletics, and commends Athletics Australia for embracing the opportunity it represents.

APC President Glenn Tasker said, “Athletics is the biggest sport on the Paralympic Games program.  It is a sport in which Australia has a rich Paralympic heritage and it is one of the most accessible sports for people with an impairment.  It is vital to Australia’s sporting landscape that the sport is vibrant and constantly growing.

“Athletics Australia was the first National Sporting Organisation in Australia to embrace mainstreaming and take on responsibility for its Para-sport pathways and performances.  The organisation deserves great credit for that and the sport has benefited enormously in return.

“The APC believes this review provides the opportunity to take the sport into a very positive future, and we look forward to making a constructive and positive contribution to the review process.

“Athletics has produced some of the biggest names in Paralympic sport both here and on the international stage.  Louise Sauvage, Kurt Fearnley and Evan O’Hanlon are some of the greatest athletics stars Australia has produced.  To continue that success in an environment of increasing competition both at the elite and community levels will require change. It will not be easy, but it can be done.”

The APC has worked closely with Athletics Australia since 1999 to develop both the sport and Australia’s Paralympic athletes.  In the four summer Paralympic Games since then, Australia has won 151 medals in athletics, including 35 gold medals at the Sydney 2000 Games alone.