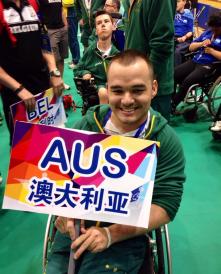 Australian boccia athlete Jason Mayweather has missed out on a medal placing at the BISFed World Championships, after losing a knock-out match to Portugal’s Abilio Valente.

The Queensland BC2 athlete put up a good fight against the world ranked number two, but ultimately suffered a loss.

“Jason lost 3-2, but came so close to beating him. I could see it had him rattled,” Head Coach Peter King said.

While Mayweather was not able to progress through to the finals, the focus on training and development by the APC has helped him fine-tune his skills, and his results at the BISFed World Championships show he has the capability to continue competing at international level.

Last April, Mayweather played at the Defi Sportif World Open in Montreal but was defeated 14-1 by world number one Maciel Santos from Brazil.

“Within six months, Jason has fully extended himself, losing to the world ranked number two by only one point – an incredible improvement,” King said.

Mayweather is currently ranked number 40 in the world in his class, and as a first-time player at a world championship event, he knew he would be against tough competition.

“Jason has come a long way, which is evident in his point scores. He looked assured, aggressive and more than capable of winning,” King said.

Mayweather and BC3 athlete Dan Michel who also participated in the invitation-only event, will be returning to Australia this week.

Selected Australian boccia athletes will be invited to attend a Paralympic Preparation Program camp for further training next month.

Photo with thanks to Boccia Australia