A win progresses Australia at the BISFed World Championships 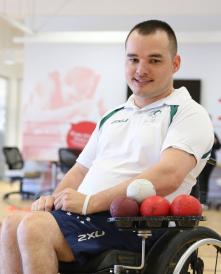 One of Australia’s best boccia players Jason Mayweather has shown he has the potential to qualify for Rio, after progressing through to the second round at the BISFed World Championships in China overnight.

Mayweather won his first round against Canada’s Dave Richer 5-4 and said that while it was no easy feat, he’s proud of the way he was able to turn the game around.

“It was a tight game in the end but I was able to hold up my defence and recover really well,” Mayweather said.

While the win does mean that Mayweather has a chance to add to his world ranking, critical to Australia sending boccia athletes to Rio 2016, Head Coach Peter King has said that to win the next round against Portugal’s Abilio Valente, he has to continue to push himself.

“Jase played well, but only played to 75% of his ability. To beat Valente, he knows he must play nearer to 90%+ mark. He believes he can do it, and I believe he can too,” King said.

This year, Mayweather had some impressive wins at the Defi Sportif World Boccia Open in Montreal, Canada, and won against athletes ranked in the world’s top 10.

“I have reminded Jase of his success so far, and this is chance to do the same.”

Mayweather has prepared for his next game by watching video recordings of his opposition in action, but with King’s advice, is approaching the world championships one game at a time.

“We’re not talking or thinking any further ahead than this next game,” King said.

Australia’s only other boccia athlete invited to participate, Dan Michel went three rounds end to end, against world number four from Greece, but ultimately lost his game. The skills displayed, however, prove that he has the potential to go far in international boccia.

“Dan played very well and most importantly, he showed he could beat athletes ranked in the top five, and is on his way to doing it regularly.”

The BISFed World Championships is the largest Boccia competition that has ever been held, with more than 180 athletes from 30 countries participating. Games can be streamed live on 2014bwc.org.cn

Photo with thanks to Boccia Australia