2014 Para-athlete of the Year nominees announced 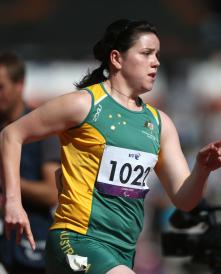 It is with great excitement that Athletics Australia can confirm the illustrious list of finalists for the sport’s most prestigious honours, to be presented at the 2014 Athlete of the Year Awards, proudly presented by Eurosport on Thursday, 23 October.

Culminating with the announcement of the Male and Female Athlete and Para-Athletes of the Year, the event will bring together the athletics family to celebrate the 2014 year and our many successes on the track and in the field both domestically and around the world at events such as the IAAF World Race Walking Cup and the Commonwealth Games.

The evening will also see the induction of a new Athletics Australia Life Governor, the presentation of the Edwin Flack Award and Coach of the Year Awards and the announcement of bib numbers for our most recent Australian representatives at the Commonwealth Games.

Para-athletes of the Year nominees in the both the Male and Female categories are as follows:

Male Para-Athlete of the Year
Kurt Fearnley (NSW)
Fearnley stormed home in the wheelchair 1500m to win a silver medal at the 2014 Commonwealth Games to continue an international career that includes multiple Paralympic and world championship medal winning performances. He also won silver at the 2014 Australian Athletics Championships.

Michael Roeger (SA)
Improving his personal best across multiple distances, Roeger’s year is best highlighted by his number one ranking in the T46 1500m for arm amputees following a successful training camp in America.

Chad Perris (WA)
A bronze medallist in the ambulant 100m at the Australian Athletics Championships, Perris closes the year with a new personal best and the number one world ranking for the men’s short sprint for visually impaired athletes (classification T13).

Deon Kenzie (TAS)
Continuing his open age athletics rise after a strong showing at the IPC Athletics World Championships in 2013, Kenzie is the national champion for the ambulant 800m and 1500m, and the world number one ranked 800m runner for the T38 800m for athletes with cerebral palsy.

Female Para-Athlete of the Year
Jodi Elkington (NSW)
Elkington delivered a dominant performance at the 2014 Commonwealth Games to win gold in the women’s F37/38 long jump for athletes with cerebral palsy. Her performance of 4.22m was so impressive that it, together with each of her other legal jumps, were enough to stand atop the dais.

Angela Ballard (NSW)
The bronze medallist in the wheelchair 1500m at the Australian Athletics Championships, Ballard went on to win gold in the T54 1500m event at the Commonwealth Games.

Kath Proudfoot (NSW)
Proudfoot is the Australian champion in the ambulant shot put, and she has rounded out 2014 as the world number one ranked athlete for the F36 shot put, an event in which she will look to defend her medal winning performance from London at the Rio Paralympic Games.

Christie Dawes (NSW)
The silver medallist in the women’s wheelchair 1500m at the Australian Athletics Championships, Dawes narrowly missed a medal in the T54 1500m event at the 2014 Commonwealth Games. She also placed 5th in the London Marathon in March.