Strong start by the Steelers at Worlds 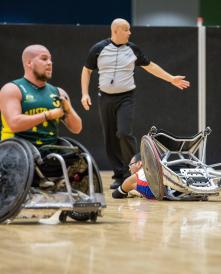 The Australian Steelers have made an emphatic start to the 2014 Wheelchair Rugby World Championships by defeating Great Britain 55-46.

The reigning Paralympic champions were dominant from the outset. They forced three turnovers from Great Britain’s first three possessions and converted them into goals.   From there, the Steelers’ lead was never really in danger.

Pleasingly for head coach Brad Dubberley, the contest provided him with a great opportunity to give his more inexperienced players some big minutes and they didn’t disappoint. Featuring in their debut match at World championship level, Jayden Warn, Mick Ozanne and Jason Ellery all delivered very impressive performances.

“Every game is going to be hard in our pool, but it was good to start well against a very strong team and get the win,” Australian captain Ryan Scott said.

“It was an awesome start from the starting four and the guys that came on after that did a good job as well.

“I think the best part is that in the past, we have been accused of having only one or two world class line-ups, but now we have three and four. They are coming on and extending our leads now, they’re not just coming on and trying to hold on.

Australia’s next challenge comes tomorrow, when they face a gruelling double-header against two high quality European opponents. They do battle with Belgium at 7:15 pm (AEST), before facing off against host nation Denmark at 12:15am (AEST).

Australian coach Brad Dubberley believes his men are up to the challenge.

“Belgium have lost two games which they would have thought they could win so hopefully we’ll get off to good start against them too, and give all of our guys some really minutes.

“Denmark is going to be a very tough game. They are out to cause an upset at this tournament and they pushed us when we were here last year for the world championship test event. We’re looking forward to it.”

The 2014 IWRF Wheelchair Rugby Championships are being contested in Odense, Denmark from 1-11 August, 2014