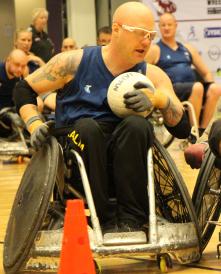 The Australian Steelers have completed their final training session in Odense, Denmark ahead of their opening match on Tuesday at the 2014 IWRF Wheelchair Rugby World Championships.

The Steelers have been in Denmark since Wednesday, have settled in well and have adjusted to the very warm conditions that have tested the preparations of the 12 nations this week according to Australian captain Ryan Scott.

“Everything has come into place right at the right time,” Scott said.

“Obviously it is a long trip for us, and we’re coming from winter to summer, but everyone has adjusted really well, we’re enjoying the weather and we’re really looking forward to things getting started.”

Despite being the reigning Paralympic gold medallists, the Australians have never won a World Championship and will enter tomorrow’s opener against Great Britain hoping to make a statement.

“GB has a lot of new faces and a lot of potential, we know we can’t take them lightly,” Scott said.

“They will take a lot of confidence from the recent [World Championships warm-up event] Canada Cup, but we’re going to capitalise on what we have done to them in the past – we haven’t let them get anything over us.

“Our plan is to start well. We’re going to go out and be as physical as possible.”

The 2014 IWRF Wheelchair Rugby World Championships opened late on Monday evening (AEST) with host nation Denmark defeating Belgium 52-43. In the only other match on day one, New Zealand defeated France 55-47.