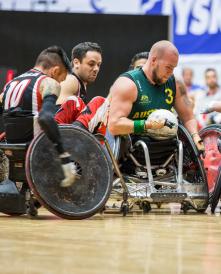 Australia has booked a place in the semi-finals at the 2014 IWRF Wheelchair Rugby World Championships after defeating Canada 68-61 in their final pool game overnight in Denmark.

The Steelers now face Japan in the semi-final and are just one win away from featuring in the gold medal match.

In what was a battle for top spot in Pool A overnight, Australia and Canada entered the clash knowing that defeat would send them into a semi-final showdown against Team USA, the reigning World Champions. While victory would set up a more desirable semi-final against the Japanese, ranked four in the world.

With the stakes sky high, the Australians were the ones who handled the pressure better and dominated the early stages. They forced three turnovers in the opening three minutes and raced to a 5-1 lead.

But the Canadians fought bitterly and were able to stay with the Steelers until deep into the fourth quarter. It was only until the Canadians showed fatigue and conceded some uncharacteristic turnovers in the final three minutes that the Steelers felt comfortable that victory was theirs.

“They did come back at us in the second quarter but I was wasn’t too worried to be honest. I thought in the third quarter we did really well to maintain our composure. We were able to gain the ascendancy and keep it,” Australian head coach Brad Dubberley said.

“Canada run off momentum and if you can get the jump on them early, that forces them to a play of style that they don’t like. We were able to do that well and it was just a great game all round from our guys I thought.”

The seven-goal triumph ensured the Steelers emerged undefeated from their five pool matches, achieving the first goal Dubberley set for his men.

The next goal is a semi-final victory against Japan before they chase the biggest of them all in Sunday’s final.

“This is exactly where we wanted to be and it’s where we expected to be. It was our goal to be on top of our pool after the five pool games” Dubberley said.

“Earlier in the week, we were able to conserve and rest our players so we’re heading into the business end of the tournament feeling fresh which is a bonus.

“We still have a few little things to sort out, but we are exactly where we hoped to be which is in the semi-final of the World Championships.

“It’s hard to make a semi-final at a Paralympics or a World Championships at the best of times, but this is the position we’re in and now we want to go all the way.”

The Australian starting line-up of Ryley Batt (40 goals), Chris Bond (27 goals), captain Ryan Scott and Nazim Erdem all continued their outstanding tournaments against the Canadians, while Jason Lees and young gun Jayden Warn (1 goal) were strong in the final minutes.

The Steelers now turn their attention to Japan, who were soundly beaten by the United States in their top of the table pool B clash overnight.

And although the Australians have also enjoyed a great winning record against Japan in recent years, Dubberley said complacency will not be a factor for his team.

“Japan is a team that we’re very familiar with, and they know our game inside and out as well.

“They are a great team and we know that we have to come out and start very well, because we have seen in recent times that if we can do that, they generally fade later in the game.

“Complacency is definitely not an issue for us. We know that their big guns are all quality players and are capable of winning big games. So we are approaching this game very seriously, because we know that if we don’t, we’re in real danger of being upstaged.”

After Canada and the United States do battle in the first semi-final at 23:00 on Saturday, Australia plays Japan at 00:15am (AEST) on Sunday for a place in the World Championship gold medal final.