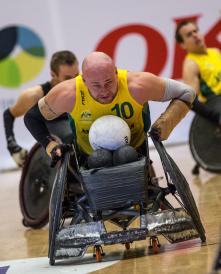 The Australian Steelers have emerged victorious from their double-header overnight at the 2014 IWRF Wheelchair Rugby Championships, with wins over Belgium and host nation Denmark.

After posting a 72-47 victory over the Belgians on Wednesday evening (AEST), the Steelers had to back up less than four hours later to face a dogged Danish team buoyed by their home crowd in Odense. The Steelers prevailed 56-50.

But it was far from a flawless display.

Australian captain Ryan Scott conceded that his men were nowhere near their best against the Danes, who were clearly desperate to cause the tournament’s first major upset.

“We have to give credit to Denmark. We started much better than them and from there, we should have demoralised them and rubbed it in and went further and further ahead, but we weren’t able to do that,” Scott said.

“They fought hard and stayed with us. Tactically, we didn’t really do the things we were supposed to do. We got frustrated.”

Nevertheless, Australia now sits on top of pool A at the World Championships with three wins from three outings. Finland on Thursday and Canada on Friday are the next two assignments.

Australian coach Brad Dubberley said he will be looking for a big improvement as the tournament approaches to the do-or-die stage.

“There are definitely some things that we can improve on, but I feel we’re building towards to the finals as the week progresses,” Dubberley said.

“Leading into the bigger games – Canada in the last pool game and the finals – we will be in great shape. But we can’t get too far ahead of ourselves.”

Ryley Batt (26 goals) was the leading scorer for the Steelers in their 25-goal romp over Belgium, while Chris Bond (19 goals) led the Australian offence against the Danes.  New comers Jayden Warn, Jason Ellery and Mick Ozanne were also among Australia’s best in both matches.

Canada remains the only other undefeated team in pool A, which sets the scene for a blockbuster clash against Australia on Friday, while the United States and Japan are unbeaten in the other pool.

The 2014 IWRF Wheelchair Rugby Championships are being contested in Odense, Denmark from 1-11 August, 2014.