Shattered Chaffey out of World Champs after fall 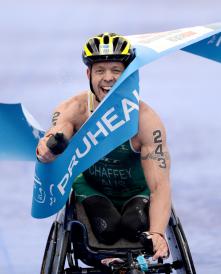 Australia’s four-time World Paratriathlon champion Bill Chaffey is a shattered man after a freakish training accident on the NSW Far North Coast forced him out of the ITU World Championships in Edmonton.

The 38-year-old has broken two bones in his pelvis after falling out of his racing wheelchair at Fingal, near his home at Tweed Heads.

Chaffey became an incomplete paraplegic in 2005 when he was hit by a truck while riding his bike, training for an Ironman Triathlon, suffering a broken back in four places, broken pelvis, elbows and spinal cord damage as a result.

The Tweed Heads policeman remains paralysed in his left leg and has limited movement in his right.

But over the past five years Chaffey has become the face of Australian Paratriathlon – winning four gold and a silver at ITU World Championships and clocking a world best time over the ITU distance and also finishing second in the arduous Ironman Triathlon in Hawaii.

Now Chaffey faces another major challenge to get himself ready to achieve his dream and make the Australian Paralympic Team in two years time.

He will be out of action for at least six weeks, after breaking his ischium and pubis bones in half and displacing his hip, robbing him of an opportunity to race for a fifth ITU crown and a rare tilt at the 70.3 World Championship, in Mont-Tremblant, Quebec a week after Edmonton.

The inspirational Chaffey was a red-hot favourite to win title number five, his coaches saying he was in the best shape of his career.

“I am absolutely shattered…it’s the word that comes straight into my mind knowing how good a shape I was in for the ITU Worlds and the fact that it would be a rare chance to race over 70.3,” said Chaffey.

“And the fact that it happened so simply – I’ve had much worst accidents and crashes in my career and come away unscathed.

“When the wheel got stuck, the chair tumbled over and I landed on my hip and while it hurt like hell when I did it, I got back into my chair.”

But such is the toughness of one of Australia’s most inspirational sportsmen, the man who has his sights set on the inaugural Paratriathlon at the 2016 Paralympics in Rio, he didn’t go home or to the hospital.

Chaffey continued on his training session for another 30 minutes with two broken bones in his pelvis before driving back to his home in Bilambil near Tweed Heads – believing he had only suffered bruising.

“At around 6.30pm – six hours after the accident, the pain was getting worse so with some encouragement, I decided to go to the hospital for x-rays,” said Chaffey.

“I was packed and ready to jump on the plane and fly to Canada (on Friday).

“But in what was a blessing, the doctor said I could have suffered a blood clot which may have been disastrous.

“While I am absolutely gutted, I will get my head around getting ready for Rio – that will now take all of my focus.

“The support I have already had the support I know I will get in my recovery I know will drive me to get back and I will be back ready to race the Oceania Championships in January.

“As much as I’m going to bored out of my mind I will be back better than ever.”