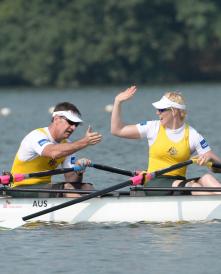 The Australian Rowing Team continued its good form on day two of the 2014 World Rowing Championships with six crews progressing into semi-finals or finals of the event, with the para-rowing team blazing a trail for the rest of the Australian crews.

The current World Champion in the Arms and Shoulders Men’s Single Scull, Erik Horrie, opened proceedings for Australia with a masterful win in his heat to automatically qualify of the A-Final of his event. The para-rowing crews race over a 1000m distance and the single sculler clocked in a time of 5:11:81, winning his heat some 18 seconds ahead of his closest rival in a display described by the commentary team on the course as ‘effortless’.

Meanwhile, fellow World Champions, this time in the Trunk and Arms Mixed Double Scull, Kathryn Ross and Gavin Bellis had a steady race that saw the Canberra-based duo take victory in a time of 4:15:53 in overcast and cool conditions. Ross and Bellis needed a top two finish to progress to the A-Final, which they secured, pushing the local Dutch crew into second, who also qualified.

Making their debuts today for the Australian Rowing Team were Jeremy McGrath and Kate Murdoch in the Legs, Trunk and Arms Mixed Double Scull. The Sydney-based crew led the race from the start, however when it came to the final 250 metres they were being challenged by the French crew of Guylaine Marchand and Antoine Jesel.

A final push from McGrath and Murdoch saw this young combination over the line first, by a margin of just 0.52 seconds, and secured them a place in the A-Final later this week.

Speaking post-race, McGrath said: “It’s obviously great to walk away with a win on our first day representing Australia at a World Rowing Championships but we’ve got to keep focused as we have a final to turn our attention to now but it certainly was a great way to start our campaign for Australia.”

Murdoch admitted it had been a hard push for the line: “Due to the fact I can’t see what is going on, I rely on Jeremy to say the magic word of ‘Go’ before we kick down for the finish, so when he said it twice in the final 250 metres I really had to go for it. It’s exciting to have a win in our first race but it’s all about focusing on the final now.”

After the lunch-break more of the ARTeam got underway, with the Men’s Coxed Pair swiftly followed by the Lightweight Men’s Coxless Pair. Both boats needed a top two finish in order to progress to the A-Finals of their boat class, but neither managed it, both finished fourth, and therefore they will race the repechages later this week in a bid to make their respective A-Finals.

The Lightweight Women’s Quadruple Scull had to finish in the top two of their heat to progress to the final of their boat class, and set out with the home nation, The Netherlands who set the pace for the race.

The Australian crew of Hannah Every-Hall, Maia Simmonds, Sarah Pound and Laura Dunn moved with the Dutch throughout the race but it didn’t change when it came to the line with the Netherlands crossing the line first with the 34 stroke rate to Australia’s 36. The crew will now race on Friday 29 August in the final of their boat class.

The Lightweight Men’s Coxless Four were up against the in-form New Zealand crew who won the World Rowing Cup in Lucerne last month. The New Zealanders led at the start but going through the 900m mark Australia pushed ahead of the Kiwis.

With every stroke Australia managed to move further and further away from New Zealand who remained in second and closed in marginally on the Australian crew of Nick Silcox, Samuel Beltz, Blair Tunevitsch and Tom Gibson, however it was to be Australia’s day as they claimed victory in a time of 6:15:34, some two seconds ahead of their Trans-Tasman rivals.

Beltz said post-race: “It’s always good to get a solid race out the way at the start of a regatta like this, we were fairly confident as we settled into our mid-race rhythm, I just called it how I saw it and slowly but surely we made it through the pack and put down on the other side for the win.

“It’s just a heat at the end of the day, the New Zealanders haven’t been beaten since last year’s World Championships, they haven’t been beaten all year, so sure it’s nice to take some confidence from the fact we beat them today but at the end of the day it was a top two finish to make the semi-final, and it’s all about Friday now and putting it on the line to get to the final.”